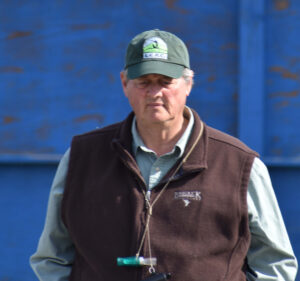 I reside in the town of Highgate, Vermont (in the very northwestern corner of Vermont) with my wife Vicki and four black Labrador retrievers.

I have owned and trained retrievers for hunting and testing for 40 years. I acquired my first retriever and began training her in 1980 and the passion, fascination and curiosity for training, hunting and running these creatures has grown continuously since.

I began campaigning  retrievers with the inception of the hunting test movement and continue to do so to as great an extent as possible given vacation time and budgetary constraints. Over the course of my career with retrievers, the retrievers I have owned and co-owned have achieved a total of 6 NAHRA Master Hunting Retriever titles and 4 NAHRA Grand Master Hunting Retriever titles, as well as a number of the lower level NAHRA titles. Additionally, my retrievers have been successful in the AKC Hunting Test program.

I joined the Lake Champlain Retriever Club (LCRC) in 1981 and have been an active member for 39 years and am the current Vice-President of LCRC. I am a past President of LCRC and have organized and participated in a plethora of events and activities over the years. I currently am chair of the annual LCRC NAHRA Field Test and have chaired numerous NAHRA Field Tests in the past as well as AKC Hunting Tests.

I alluded to “the inception of the hunting test movement”. Very early on in my involvement with LCRC, I worked at and participated in events we called “Gun Dog Trials”. Unbeknownst to me at the time, these were the pre-cursors to what would become The NAHRA Field Test. Some of my very fond experiences were birdboying for the likes of Ned Spear, Jack Jagoda  and Richard Wolters at some of the earliest Tests. So, I believe I can claim to have been involved with NAHRA since its beginning.

In addition to NAHRA, over the years I have participated in numerous AKC Hunting Tests, AKC Field Trials and HRC Hunts. I believe all these venues are very fine programs and intend to participate in them in the future. However, I find NAHRA to be the program I enjoy the most. To me, it seems to be the most approachable, especially for the hunter and the least pretentious. Simply put, the NAHRA Tests are the most fun.

I have been a staunch supporter of NAHRA throughout all these years, in spite of its ups and downs. In light of all of which I am deeply interested and invested in seeing NAHRA continue and to be a vibrant venue for Hunting Retrievers.  I believe that with conscientious efforts NAHRA can continue to be a superior hunting retriever venue.  I am more than willing to expend considerable time and effort to help see NAHRA do well.