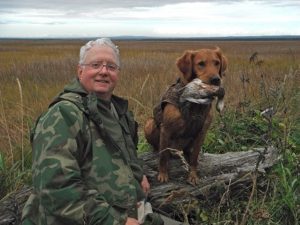 In October of 2017, I was asked by the board members of Midnight Sun Gun Dog Association if I would be interested in being nominated as the Alaska Representative for NAHRA in the capacity of Regional Director since Graham Woods had notified Kody of his intention to step down as the current Regional Director. Fast forward into 2018 and I find myself with a new title and new responsibilities.

I arrived at the Midnight Sun Gun Dog Association as a guest at the annual fundraising banquet held in late April every year prior to kicking off our picnic test in early May in preparation for all the sanctioned NAHRA hunt tests for the upcoming year. That was only 6 years ago. Considering the length of time NAHRA has existed, I feel like an apprentice looking up to the numerous seasoned veterans within the North America Hunting Retriever Association. I have had tremendous support from the Midnight Sun Gun Dog Association in Alaska and look forward to another exciting year working with our club.
My interest in hunting and especially hunting with a dog takes me back when I was 18 years old hunting rabbits with my Beagle. Hound dogs are fun but eventually, I joined the retriever family with a Golden Retriever and never looked back. I grew up in Arizona hunting quail and doves with my red buddy Rusty. After moving to Alaska in the late 70’s my interest turned to duck hunting and learned the hard way that the best hunts were with a professionally trained retriever. I had no idea the magic a good dog could perform. Ten years ago I bought a 7-week-old pup out of Wildfire Kennels in Minnesota named Wildfire Rushing River. Under the guidance of Pro-Trainer Baron Rea, River and I discovered the challenge and excitement of the hunt test. Even though there are are a variety of hunt tests available for working retrievers, the NAHRA family of hunt tests represent to me the most comprehensive structure that showcases all the skills a working retriever acquires.